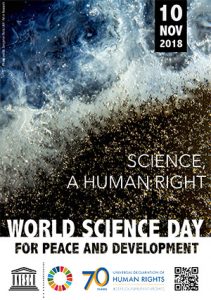 On Saturday, November 10—as part of UNESCO’s World Science Day for Peace and Development and the International Science Center and Science Museum Day—the Association of Science-Technology Centers (ASTC) and the American Association for the Advancement of Science (AAAS) presented a global, online discussion exploring issues related to the 2018 theme: “Science, a Human Right.”

This rich, in-depth program can be part of your upcoming public programs, the basis for staff and board discussions, background for strategic planning, and more.

A panel of experts will gathered in in Washington, D.C., at the AAAS headquarters and in four science centers and other locations around the world

During the program, Jessica Wyndham, Director of the AAAS Science and Human Right Coalition, explored the connections between science and human rights in a discussion with with experts and scientists (see below) who have been studying several aspects of the relationship between science and human rights, from the right to do research to the free circulation of information, as well as questions related to the ethics of science in various fields such as health and biotechnology.

Then, experts (see below) and audiences in the science centers commented and asked questions in a round moderated by Cristin Dorgelo, ASTC President and CEO. This portion of the program examined how we communicate science to large audiences, particularly through science centers, and explored new ways that academics, international organizations, and our institutions can work together in this area.

Part 1—
How do science and human rights relate and what are the parts of it?

Jessica Wyndham, Director, AAAS Scientific Responsibility, Human Rights, and Law Program, and Coordinator, AAAS Science and Human Rights Coalition
For the past 11 years, Wyndham has led the efforts of AAAS and the AAAS Science and Human Rights Coalition in bringing the voices of scientists, engineers, and health professionals to a United Nations process of defining the right to enjoy the benefits of scientific progress and its applications. Together Margaret Weigers Vitullo, she has conducted research on the meaning of the right from the perspectives of scientists, engineers, and health professionals. She has analyzed the reports of governments to the UN about their efforts to implement the right, and she has developed case studies suggesting how the right may be applied in practice.

Margaret Weigers Vitullo, Deputy Director, American Sociological Association
Vitullo has worked with departments and faculty across the United States to advance sociologists in their professions and improve department management and leadership, curriculum, teaching, and assessment of learning outcomes. Prior to the ASA, she was a faculty member and Chair of the Sociology Department at Gallaudet University in Washington, D.C., and worked as a research scientist at the Agency for Health Care Policy and Research. She has also served as a consultant to the AAAS Science and Human Rights Program in Haiti, Guatemala, and South Africa. Her current areas of scholarship include sociology and human rights, and teaching and learning in higher education. Vitullo has been a lead researcher in the work of the AAAS Science and Human Rights Coalition to define the right to science, with contributions including the conceptualization of a “continuum of access” as a framework for addressing access in the context of the right to science.

Shirley Malcom, Head of AAAS Education and Human Resources Programs
Malcom’s expertise is in the areas of education, diversity, and inclusion in science—particularly among underrepresented groups—and public understanding of science and technology. She was head of the AAAS Office of Opportunities in Science from 1979 to 1989. Between 1977 and 1979, she served as program officer in the Science Education Directorate of the U.S. National Science Foundation. Prior to this, she held the rank of Assistant Professor of Biology, at the University of North Carolina in Wilmington and for two years was a high-school science teacher. She chaired the U.S. National Academy of Sciences Committee on Barriers and Opportunities to Two-Year and Four-Year STEM Degree Completion. She serves on the boards of the Heinz Endowments, Public Agenda, the National Math-Science Initiative, and Digital Promise. In 2003, she received the Public Welfare Medal of the U.S. National Academy of Sciences, the highest award given by the Academy.

In Medellin, Colombia, at Parque Explora:

Brigitte Luis Guillermo Baptiste is the director of the Research Institute of Biological Resources Alexander von Humboldt, a nonprofit civil corporation linked to the Ministry of Environment, which protects biodiversity in Colombia. She is a biologist by profession and holds a master’s degree in tropical conservation and development from the International University of Florida, thanks to a Fulbright Commission scholarship. Baptiste is one of the greatest experts in environmental issues and biodiversity in her country. She is also a member of the Multidisciplinary Panel of Experts of the Intergovernmental Scientific-Policy Platform on Biodiversity and Ecosystem Services (MEP / IPBES), representing Latin America.

Part 2—
How to communicate “Science, a Human Right” to the general public and what could be the role of science centers?

In Medellin, Colombia, at Parque Explora:

Andrés Roldán is Executive Director of Parque Explora—one of the largest and most visited science, aquarium, and planetarium museums in Colombia. He guides his team in the creation of interactive and innovative learning environments that contribute to the public understanding of science and technology. He also leads projects that dilute the walls of the museum and take it to different territories through projects, workshops, community processes, and itinerant experiences. The experiences developed by Parque Explora include interactive science centers, planetariums, aquariums, temporary exhibitions, libraries, learning centers, and interpretation centers—connecting people and their territories with new narratives that bring healthy conditions for a social transformation. As a participant in the transformation of Medellin, Roldán works from the paradigm of the civic commitment of museums, in which the equal access of opportunities between people and communities is prioritized. For Roldán, the union of education, culture, urban planning, collaborative economies, and architecture is vital in sustainable community development. The management of the Explora Park is a paradigm of work integrating the private sector and the development of public policies that provide equity with access to culture and knowledge for vulnerable communities.

Cristin Dorgelo is President and CEO of the Association of Science-Technology Centers (ASTC). ASTC is an international organization of science centers, museums, and related institutions dedicated to furthering public engagement with science among increasingly diverse audiences. ASTC encourages excellence and innovation in informal science learning for children, youth, and adults. Founded in 1973, ASTC has nearly 700 members in 50 countries, including science centers and museums, and also nature centers, aquariums, planetariums, zoos, botanical gardens, space theatres, and natural history and children’s museums. Cristin previously served as Chief of Staff and the Assistant Director for Grand Challenges at the White House Office of Science and Technology Policy, facilitating policy development and implementation across a broad spectrum of science and technology issues, with a particular focus on open-innovation approaches and cross-sector collaboration to address grand challenges. From 2006 to 2012, Cristin was Vice President of Prize Operations for the XPRIZE Foundation, a nonprofit prize institute in Culver City, California. She helped launch several startup companies at the Pasadena, California, incubator Idealab from 2000 to 2006 and was part of the founding team of X1 Technologies. Cristin started her career at the Los Angeles Times and holds a BA in history with a minor in anthropology from UCLA.

Gène Bertrand is Head of Programs and Development for the three institutions at Museumplein Limburg: Columbus Earth Center, Cube Design Museum, and Continium Discovery Center. With a background in culture, media and education, he has worked for more than 40 years in science communication/education at industrial museums, science museums, and science centers. Bertrand was member of the development team for Industrion, which opened in 1998 as a museum exploring industry and society, and won the 2000 European Michelleti Award for most innovative technology museum. In 2002, he became its Head of Public Affairs and was responsible for education, press, media, public relations, marketing, and visitor services. From 2005 onward he has worked on a further development of Industrion, resulting in its evolution into Continium Discovery Center in 2009, as well as the development of the two new venues, Cube Design Museum and the Columbus Earth Center. Most recently, he has led the development of the museum’s living labs, and the methodologies used in them, in a combination of design, technology and science.

In Barcelona, Spain, at CosmoCaixa:

Jordi Pascual is the Founder and Coordinator of the Culture Committee of United Cities and Local Governments, whose objective is the progress of Agenda 21 for culture. He is an Associate Professor at the Open University of Catalonia, where he teaches cultural policies in the masters “Cultural Management” and “Right to the City.” He is one of the leaders of the worldwide campaign www.culture2015goal.net for the inclusion of culture in the Sustainable Development Goals and the New Urban Agenda. He has been a member of the jury of the European Capital of Culture. He has written on cultural rights, governance of culture, international cultural relations, and the role of culture in sustainability, which have been translated into more than 20 languages.

Professor Mike Bruton was born and educated in South Africa, where he obtained his Ph.D. degree from Rhodes University. He initially followed a career in marine biology, but, over the past two decades, has focused on science center and museum design and development, the psychology of learning, and the history of Islamic science. He has received many international awards and honors, including the Fellowship of the Royal Society of South Africa (1984), Chevalier dans l’Ordre des Palmes Académique from France (2001), Lifetime Achievement Award from the National Science and Technology Forum, South Africa (2001), and an Emeritus Professorship from the University of Cape Town (2004).

In Milan, Italy, at Museum of Science and Technology Leonardo da Vinci:

Camilla Rossi-Linnemann is in charge of international relations at the museum. She holds a master’s degree in museum studies and has a background in physics and art History. Twelve years ago she joined the museum’s education department, working on different EU-funded projects focused on teacher-training programs, research on family dynamics in multiage learning paths, digital resources for education, and other themes connected to informal education settings. During the past four years she has worked with the museum’s director to develop networks that connect research centers, academia, policy makers, companies, and other museums in the attempt to investigate and reinforce the role of museums in and for society.