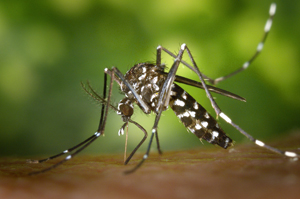 The mosquito is the most dangerous animal in the world. While there are more than 3,500 species of mosquitoes, only about 200 species—and only their females—carry the diseases that are so harmful to humans. Some of these mosquitoes are responsible for spreading the Zika virus, which is implicated in serious birth defects found in thousands of babies in South America alone. Mosquito borne diseases kill close to 2.7 million people annually.

The good news is that we can make a difference in working together to eradicate these killers from our neighborhoods through awareness and action. The GLOBE Observer (GO) Program just released a tool enabling citizen scientists worldwide to use their mobile devices for identifying and eliminating potential mosquito breeding sites. Using the mobile application, GO Mosquito Habitat Mapper, citizen scientists will also be able to identify the mosquito species responsible for transmitting Zika, dengue, yellow fever, and chikungunya. They will also be able to identify two other genera that contain species that transmit disease (Culex and Anopheles).

In the Global Experiment this year, science centers and science museums around the world, working together, can use this new mosquito application to begin to be part of the solution. They can train armies of citizen scientists to explore their households and neighborhoods and identify and eliminate potential mosquito breeding sites.

NASA–GLOBE will also share the research that is taking place to identify the spread of mosquito borne diseases, which includes the use of satellite technology to identify environmental conditions that enable mosquitoes to thrive. Each institution participating in the Global Experiment can identify the mosquito season for its region prior to the activity, so it can host events during the time when mosquitoes are active locally and can determine the level and kind of involvement that matches its programming objectives.

GO Mosquito Habitat Mapper is a founding member of a new alliance among citizen science organizations and the United Nations Environmental Program that seeks to escalate the global fight against mosquito borne diseases. This initiative, Global Mosquito Alert, brings together thousands of scientists and volunteers from around the world to track and control mosquito vectors that cause disease and is the first shared platform to leverage citizen science for the global surveillance and control of disease carrying mosquitos. Thus, data collected by science center and science museum visitors as part of the Global Experiment will be an early contribution to this ground breaking global collaboration and directly contributes to several of the UN Sustainable Development Goals.

As science center and science museum participants in the Global Experiment, you will have access to cutting edge science and scientific resources handpicked from NASA missions and the GLOBE Program. Last, but not least, our partners at GLOBE will create an animation with the results collected through the Global Experiment efforts—an amazing visualization tool that everybody will be able to use on November 10 as an ISCSMD activity.

ASTC offered two informational webinars on June 6 and 7 with two senior NASA/GLOBE education specialists, Betsy Boger and Dorian Janney. They were designed for you to learn more about how your science center or museum can participate in the Global Experiment and how you can empower your visitors to help stop the spread of mosquito borne diseases.

You can see Boger and Janney discuss several items that will be useful in talking with visitors about the science surrounding the world’s deadliest animal, the diseases they spread, and mosquito eradication, including

In the recorded webinar, you’ll also find out about the code to use with your visitors so that their observations and data will be counted with the contributions of all the other people participating though all the other science centers and museums around the world.

Additional resources discussed in the webinar are downloadable here